There has been a push in recent years for hospitals in the United States to become more baby friendly. Now this may sound weird since you would think that all hospitals are baby friendly but it's a push for an actual accreditation that means a hospital encourages breastfeeding over formula feeding and meets other guidelines.

Some of these guidelines are things like making sure baby is put to breast in the first hour after birth, encouraging nursing on demand, having baby room in with the mother rather than go to a nursery, no formula or pacifiers given out and no formula gift bags. Baby gets his bath in the mother's room instead of being taken away.

It is based on The Baby Friendly Hospital Initiative (BFHI) which is a global initiative of the World Health Organization (WHO) and the United Nations Children's Fund (UNICEF). Baby-Friendly USA is the accrediting body in the United States.

Currently only 199 hospitals in the US are designated baby friendly but there has been a big surge in hospitals moving towards accreditation since 2010. That is around the time the U.S. Department of Health and Human Services incorporated the practices into federal goals.

From the U.S. Surgeon General:

"Health care systems should ensure that maternity care practices provide education and counseling on breastfeeding. Hospitals should become more “baby-friendly,” by taking steps like those recommended by the UNICEF/WHO’s Baby-Friendly Hospital Initiative"

Baby-Friendly hospitals and birthing facilities must adhere to the Ten Steps to receive, and retain, a Baby-Friendly designation.

1.    Have a written breastfeeding policy that is routinely communicated to all health care staff.
2.    Train all health care staff in the skills necessary to implement this policy.
3.    Inform all pregnant women about the benefits and management of breastfeeding.
4.    Help mothers initiate breastfeeding within one hour of birth.
5.    Show mothers how to breastfeed and how to maintain lactation, even if they are separated from their infants.
6.    Give infants no food or drink other than breast-milk, unless medically indicated.
7.    Practice rooming in - allow mothers and infants to remain together 24 hours a day.
8.    Encourage breastfeeding on demand.
9.    Give no pacifiers or artificial nipples to breastfeeding infants.
10.   Foster the establishment of breastfeeding support groups and refer mothers to them on discharge from the hospital or birth center.

How do moms feel about this?

I recently heard some moms discussing this issue and their experiences with the hospital system that is local to me. I found it very interesting to get their take since I delivered both of my babies in this hospital system. Our local hospitals are currently trying to achieve baby friendly designation and many of these moms have experienced the old way of doing things as well as the new. I also had two very different experiences at my hospital too.

Some of the moms are not very happy about the new baby friendly push. Since they have delivered at these hospitals before some were surprised at the new changes. Some felt like breastfeeding was being pushed on them and they did not like it. They had already made a decision not to breastfeed and do not like the pressure. Others are upset that they may not get the free formula gift bag. And others, who plan to breastfeed, still just want a break and are upset that there is no longer a nursery to put their baby in during their stay.

While I do understand that change can be upsetting, I personally think the push to baby friendly hospitals is a good thing. I know some women cannot breastfeed but most can and it seems that having as much support as possible starting right after birth will be a huge help. Support is critical for breastfeeding success. Breastfeeding can be intimidating and new moms need all the help they can get to get started.

While some moms are upset that formula won't be given to them in the hospital I believe the need of many outweigh the inconvenience of a few. Formula will still be available but you will need to ask for it instead of having it automatically given to you. Plus, if you are planning to formula feed right from the beginning it would make sense to bring formula with you. Hospitals are not preventing new moms from having formula if needed or wanted, they are just explaining why breastfeeding is the recommended way to feed your baby and they are offering help getting started.

I had two very different experiences with the birth of my babies. Both at the same hospital and less than two years apart.

When my daughter was born in 2012 the hospital did have a good breastfeeding support system but some of the old ways of doing things were still in place.

I took a breastfeeding class in preparation for birth and a newborn care class, both at the hospital. I don't remember which one it was, but in one of those classes they emphasized that we should take advantage of the hospital's nursery to get a break from our newborn baby before going home.

When my daughter was born they immediately wrapped her up and they did not encourage breastfeeding. I asked when I should breastfeed and the nurse told me anytime in the next six hours! I eventually tried hours later and it really did not go well, I could barely get her to latch.

That night I sent her to the nursery to get my break and while there she had a choking incident and was taken to the NICU. Once in the NICU she was given formula and a pacifier despite my written request that neither be given.

We went on to have a couple of days NICU stay and I had great difficulty breastfeeding. I did meet with a lactation consultant who helped me start pumping.

I was given my formula gift bag upon departure and I used one of the samples on my first night home. I figured she already had formula in the NICU what did it hurt if she had some more that night. Even though I was pumping I couldn't tell if breastfeeding was working and we were nervous about her not getting enough to eat.  The next day at our first pediatrician appointment I was told that if I was going to breastfeed to stop using formula and really give it a try. She never had formula again after that appointment.

I needed to use a nipple shield to nurse my daughter and pump for the first week we were home but eventually we got on track.

While I told people that my hospital experience was good, looking back it really wasn't. I felt I missed a lot of the initial bonding time while she was in the NICU and my breastfeeding start was very stressful. Without the breastfeeding class I had taken in preparation and the lactation consultants setting me up with a pump I may not have been successful. The hospital really was in transition at this time. It offered some breastfeeding support but not enough and also conflicting information within different departments. 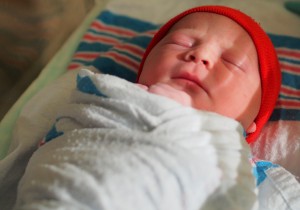 I had my second baby at the same hospital at the end of 2013 and the experience was very different. Now some of that is because my baby did not have to go to the NICU but even if he had I know it would have been different.

The hospital was well on their way to earning their baby friendly designation. While they still do not have it I know they are getting close and a lot of changes have been made in less than two years.

They still have great breastfeeding classes, lactation consultants, and pumps, but now they do a lot more.

As soon as I gave birth I was able to keep my baby and everyone left the room so I could breastfeed immediately. And we did.. my son latched on right after birth and nursed so easily. I couldn't believe how different it felt. I noticed that all the nurses I encountered during my stay really pushed skin to skin time and breastfeeding my baby as much as possible.

He never left my side and slept in the same bed as me for our entire hospital stay. I nursed on demand and ended up getting much more sleep and rest with him right there with me. It was much less stressful.

There is no longer a nursery to send your baby to and they come to your room to do the bath. I didn't see any pacifiers anywhere and I wasn't offered any.

I met with a lactation consultant who was happy to give me pointers for breastfeeding a newborn despite the fact that I was experienced with breastfeeding. There was a breastfeeding class available to me and given to all women giving birth before checkout.

I was still given a formula gift bag on checkout. This really surprised me because everything else was definitely breastfeeding and baby friendly. I know this hospital is working towards their baby friendly designation so I wonder if this will be phased out. I did not use the formula gift this time around and donated  it to mothers who needed it.

While the bag seems like a great gift, it's given by formula companies in the hope you will use it in those first hard days at home while breastfeeding is being established. If you find yourself home that first night and exhausted it's going to be really easy to reach for that free sample of formula just like I did my first night home. And supplementing with formula before your milk has even come in is going to interfere with your milk production and set you up to for breastfeeding failure. Of course this is what the formula companies want, you can't blame them, they want to sell their product.

Many hospitals in the US are working on their baby friendly designation. Baby-Friendly USA is the accrediting organization. While this is ultimately a good thing for moms and babies some mothers feel slighted and do not like the pressure to breastfeed. Breastfeeding has many benefits to mother and baby and women need a lot of support to get started. If you choose to feed formula it is still available to you but it may not appear as readily available.

Breastfeeding can be much easier to establish if it is started during the first hour after birth, moms nurse on demand, have baby room in with them rather than go to a nursery, no formula or pacifiers given out and no formula gift bags.

Please let me know your thoughts on the Baby Friendly Hospital Initiative. Have you experienced a push towards this at your hospital?