When we are trying to conceive many women I know like to obsess over possible early signs of pregnancy.

Another question I have received a lot lately, "how did you know you were pregnant while breastfeeding?"

I have also heard from women who have not had their period return but still want to get pregnant, or they are wondering if they could be pregnant.

While it's more tricky to know if you are pregnant if your period has not returned, it is not impossible for pregnancy to occur.

I have actually gotten pregnant while breastfeeding twice, so I have personally experienced some of these pregnancy symptoms while nursing.

For my fellow obsessives out there or anyone wondering about those early pregnancy symptoms, this is for you. 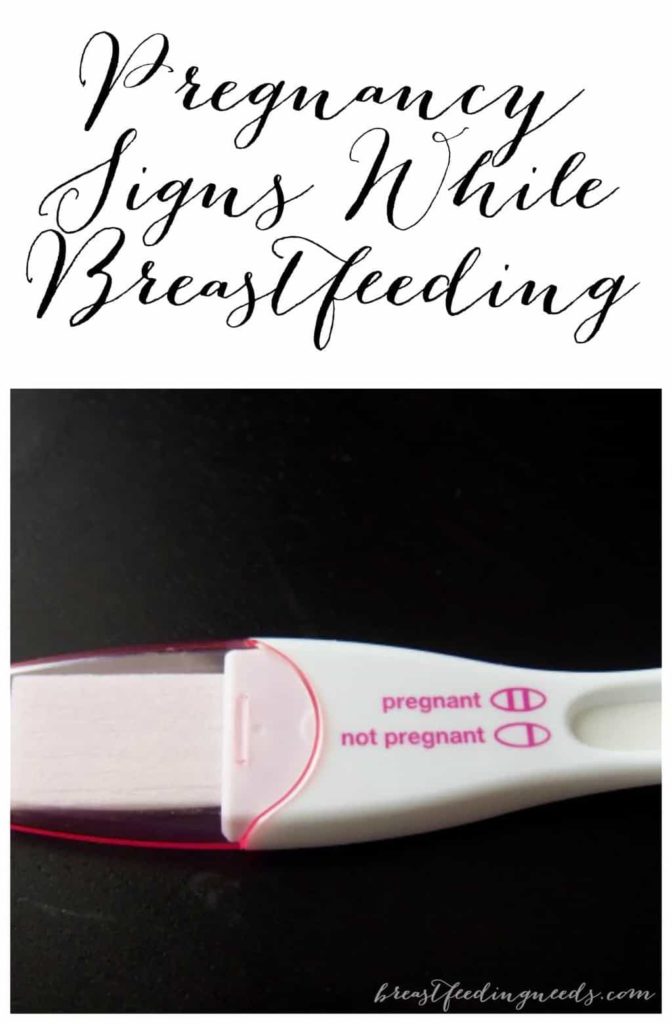 Signs and symptoms of pregnancy while breastfeeding:

Pregnancy signs while breastfeeding are usually the same as typical early pregnancy symptoms.

I know this is kind of boring to hear, but most of the usual symptoms we normally experience when pregnant occur when we are breastfeeding and pregnant too.

One notable difference is the absence or presence of a period as a pregnancy sign.

Since it is possible (but uncommon) to get pregnant before your period returns while breastfeeding; you cannot count on this as a sign.

Our cycles can be off or much different than we are used to when nursing as well. When my first baby was about one years old I decided I wanted to try and get pregnant again. It wasn't as easy to predict ovulation as the first time around though.

My period had returned when she was around 9 months old but it had yet to regulate. One month my cycle would be really short and the next it would be long. I really thought I would not be able to get pregnant again until things normalized but I did. 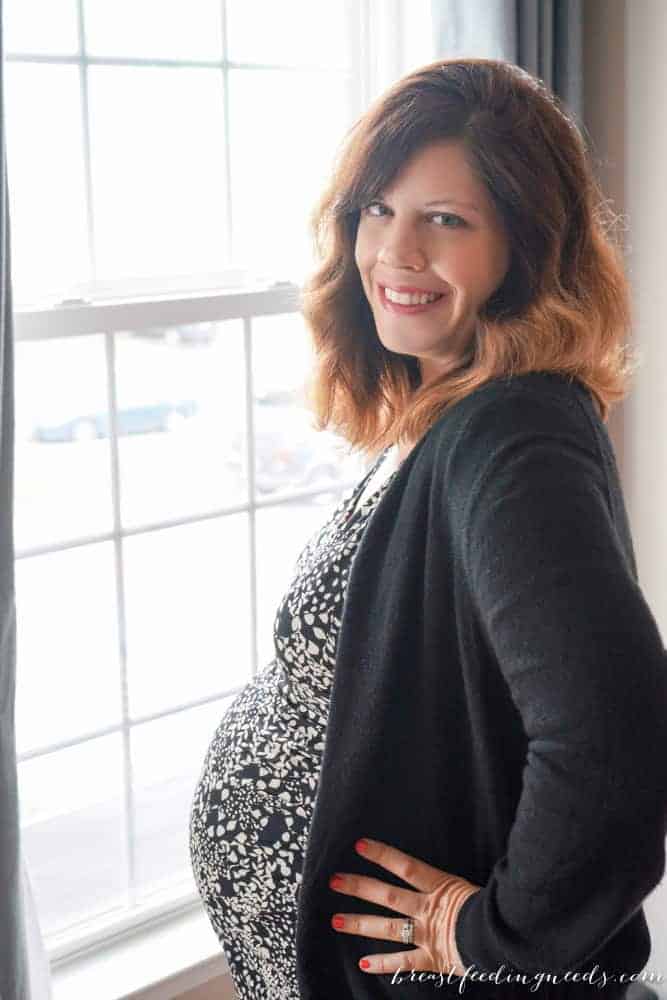 Here are some of the most common signs of pregnancy which occur when we are breastfeeding too.

For me personally, one of the very first signs I noticed the second time I was pregnant (and while still breastfeeding) was extreme fatigue when going about normal activities.

I remember going for a walk with my husband and daughter and I started to feel like I could barely make it home, I was very winded and out of breath.

I do not recall feeling that way at all the first time I was pregnant until a little later in the first trimester. 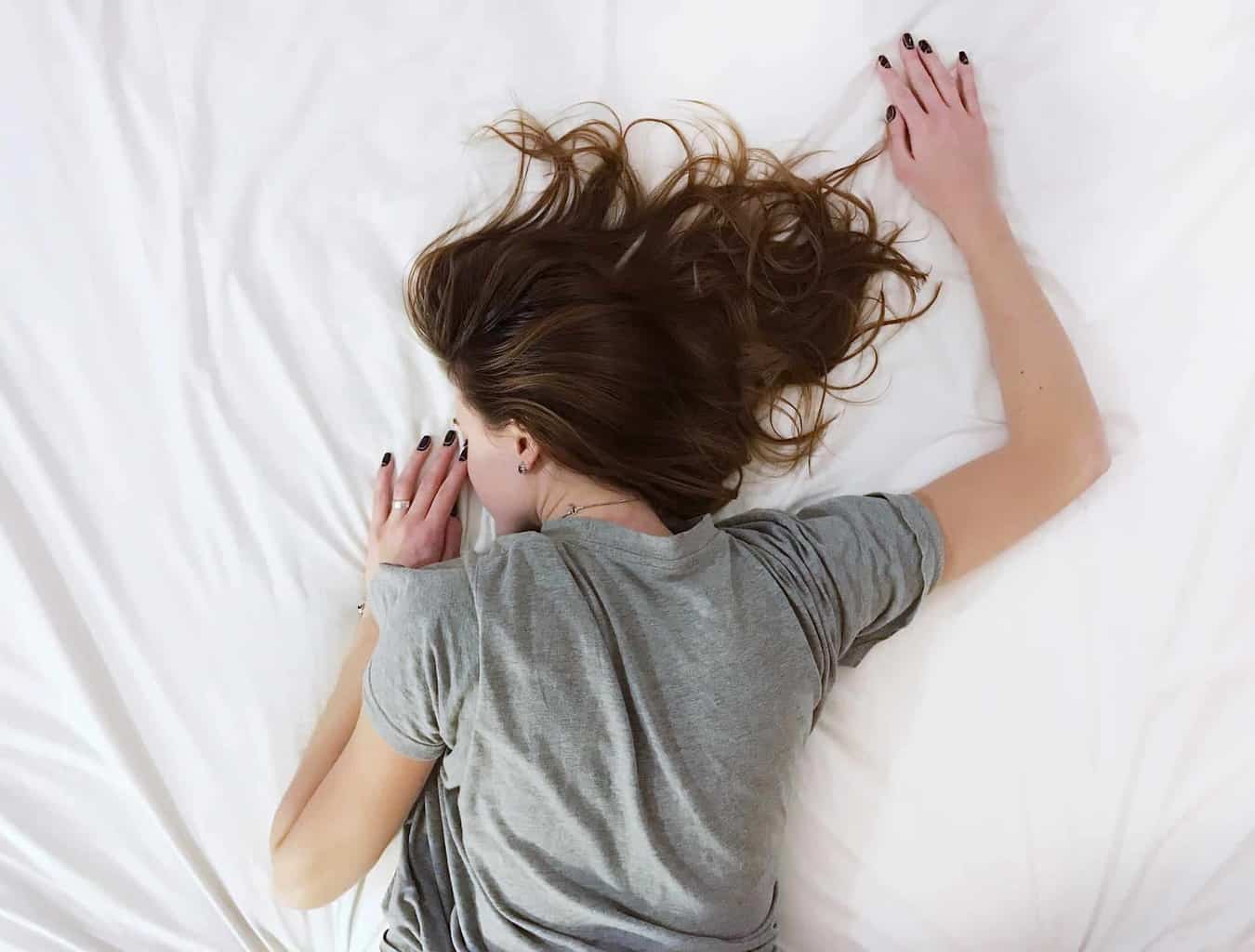 I am always more thirsty when breastfeeding, and was especially so when pregnant. I have heard from other breastfeeding and pregnant friends that this is common. 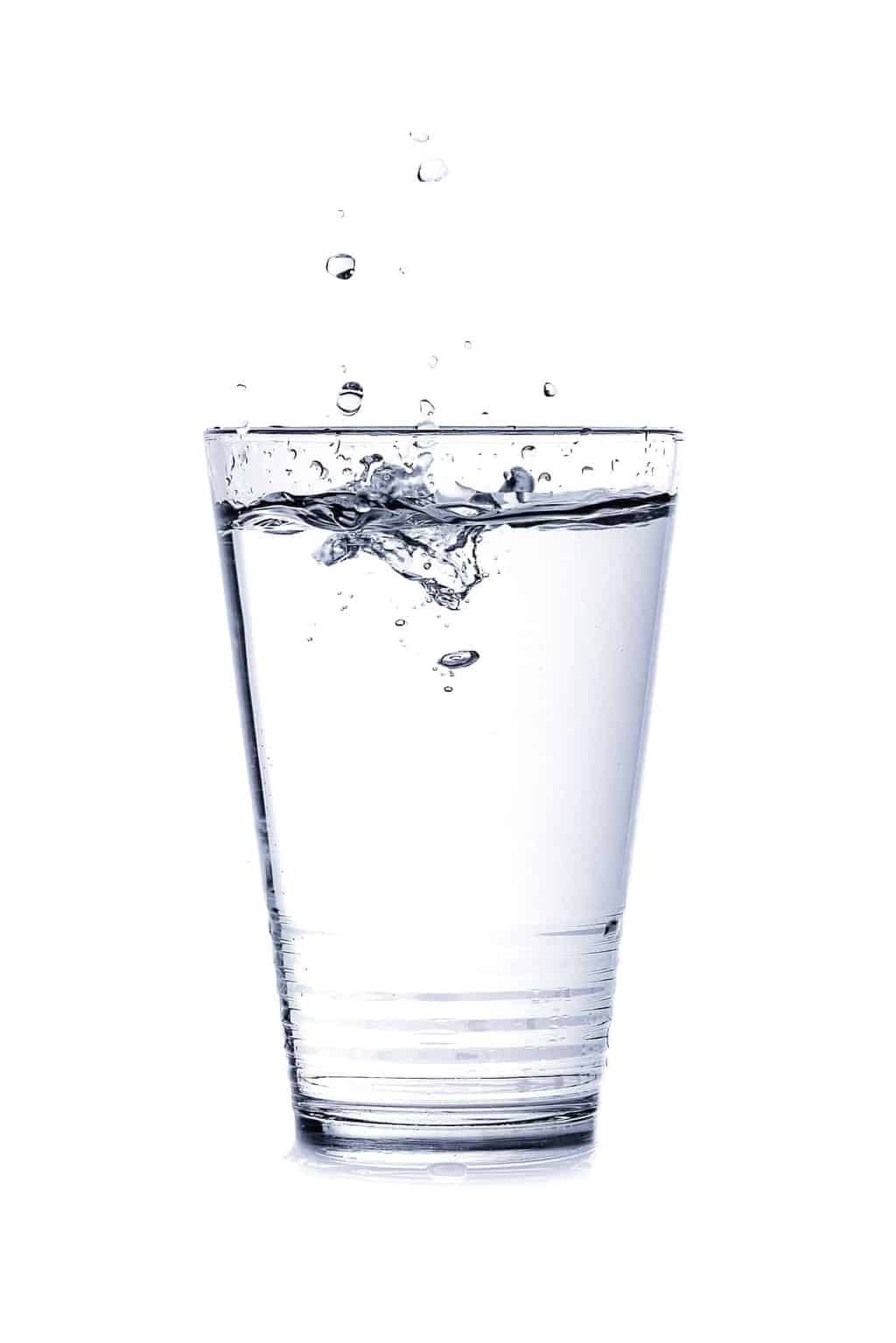 While this can be a very early pregnancy symptom whether you are breastfeeding or not; it is definitely more noticeable to me when breastfeeding. This is probably one of the earliest signs of pregnancy and a common one. While this symptom occurs even when not breastfeeding, I was much more aware of the pain since I was nursing.

Cramping and slight bleeding or spotting

I have gotten some cramps both times I was pregnant. Maybe it is implantation, but it feels like your period could be coming and it is a very common early pregnancy symptom.

Nausea can be an early pregnancy sign although usually it comes a little bit later. I had it both times around but much worse when I was still breastfeeding.

Breastfeeding was probably not related to it, but I thought I would add it here since it's a pregnancy symptom either way.

A drop in milk supply

This usually will not occur till somewhat later -closer to the second trimester, but it can be an early pregnancy sign and it will usually occur at some point when pregnant and breastfeeding.

Since a drop in milk supply is specific to nursing mothers this is definitely a sign of pregnancy while breastfeeding.

If your milk supply drops unexpectedly and you think there is a chance of pregnancy please take a test.

I have heard anecdotal stories of this being a first sign of pregnancy when a mother's period has not returned, and there are no other pregnancy symptoms.

The drop in milk supply is the first tip off of pregnancy for some breastfeeding women.

A change in milk taste

This also is typically closer to the second trimester, but the taste of your milk will probably change.

My daughter let me know when this occurred because sadly she did not like it anymore and abruptly weaned herself.

Once you are pregnant your calorie needs will go up slightly, and they should already be up a bit from breastfeeding. 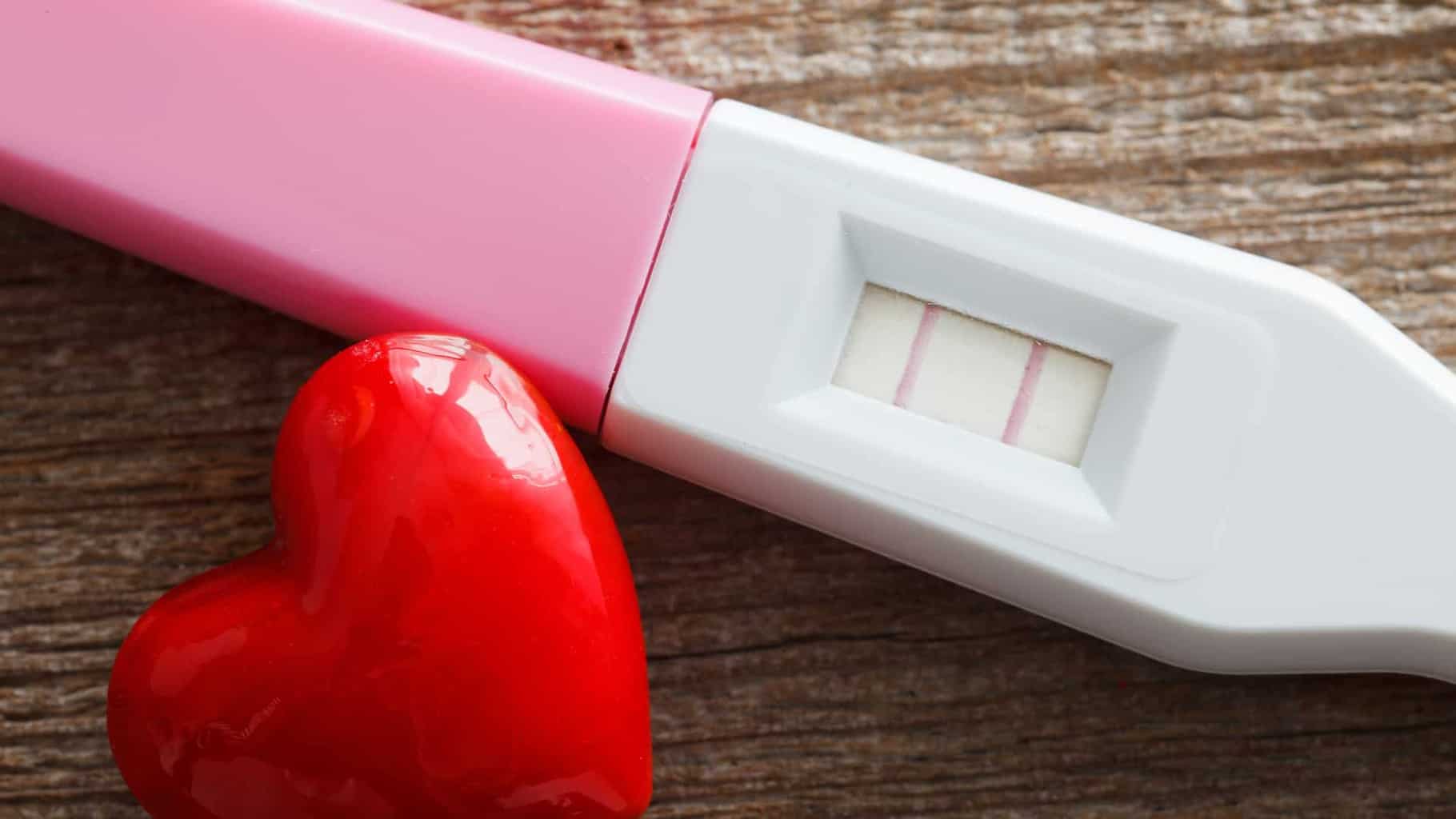 The only way to know for sure is to take a urine or blood pregnancy test.

These tests check for the pregnancy hormone human chorionic gonadotropin (hCG) and usually are the most accurate way to check for pregnancy.

Start with a home urine test and see your doctor for a blood test to confirm.

Another way to check for pregnancy is with an ultrasound, but this is usually done a little later after a blood test.

The ultrasound can be used to check for a fetal heartbeat.

What do these symptoms mean?

These signs and symptoms are fun to look for but any of them can occur even if you are not pregnant.

When our period is getting ready to return for the first time postpartum there can be some strange related symptoms.

It took me a few months for my period to get regular after each of my babies as well.

If you are hoping to get pregnant while breastfeeding I recommend using ovulation tests to try and nail down ovulation better.

As far as wondering if you are pregnant, or what the signs may be, I know it's hard when you are in the two week wait and can't test yet.

It can be even more confusing if your period has not returned ,but you think there is a chance you could be pregnant while breastfeeding.

Even while breastfeeding and without the return of a period it is possible to get pregnant although not as common.

Some of these earliest symptoms can be noticeable even before it's time to test so hopefully this list helps you.

Otherwise, if you think you may be pregnant and you are breastfeeding there is really only one way to tell for sure. Get out there and get yourself a test!

If you've been pregnant while breastfeeding please let me know, what were the earliest signs for you?

Trying to get pregnant while breastfeeding?

I have now gotten pregnant twice while breastfeeding. These pregnancies resulted in my second and third baby. I decided to write more about trying to get pregnant while breastfeeding in this post so head on over and check it out if you are inclined!

Hi, my baby is three months and I have nausea sometimes and I hurt some certain smells. Can It be pregnant? My period have not yet returned and Am on exclusive breastfeeding.

Im still breastfeeding my 15 month old baby and I had a regular period but since started to take mini pill last month, it stopped. lately my breast became sore but tolerable, I also notice Im becoming more bloated and constipated. I dont know if its because of the pill or Im pregnant. I only missed one pill last month.

If you are on the pill you are most likely not pregnant. Missing pills could cause it though. Probably the pill combined with period are leading to your symptoms. But if you have any doubts the only way to know for sure is to test! Good luck.

Hello so I’ve been sexually active and I notice a brown spotting when I wiped and cramps as if my period was already gonna come my lower back was hurting as well I was so sure I was gonna get it but up to this point still no auntie flow. I’m breastfeeding my two age 14 months and 2 year old kids I haven’t got my period like for 3 years. I still have cramps but no spotting anymore. Any suggestions would help xoxo

Wow I have really learn a lot here

My son is 9 month now and I have not deen my period since I have him but for three days now I have been feeling this discomfort around my waist while walking or I drink cold water or I sit down. I have been worried if is pregnancy or my period want to come back. Please somebody that know better should help me. Thanks.

I would guess it is your period getting ready to come back most likely.