What is it like to breastfeed a toddler? When my first baby was born I wasn't sure if I would make it six weeks breastfeeding, much less toddlerhood. It was a huge change and commitment but then again being a new parent was too. I found breastfeeding exhausting and was consumed with how much my life had changed all of a sudden. Well, yeah that happens once you birth a baby. I was pretty clueless! 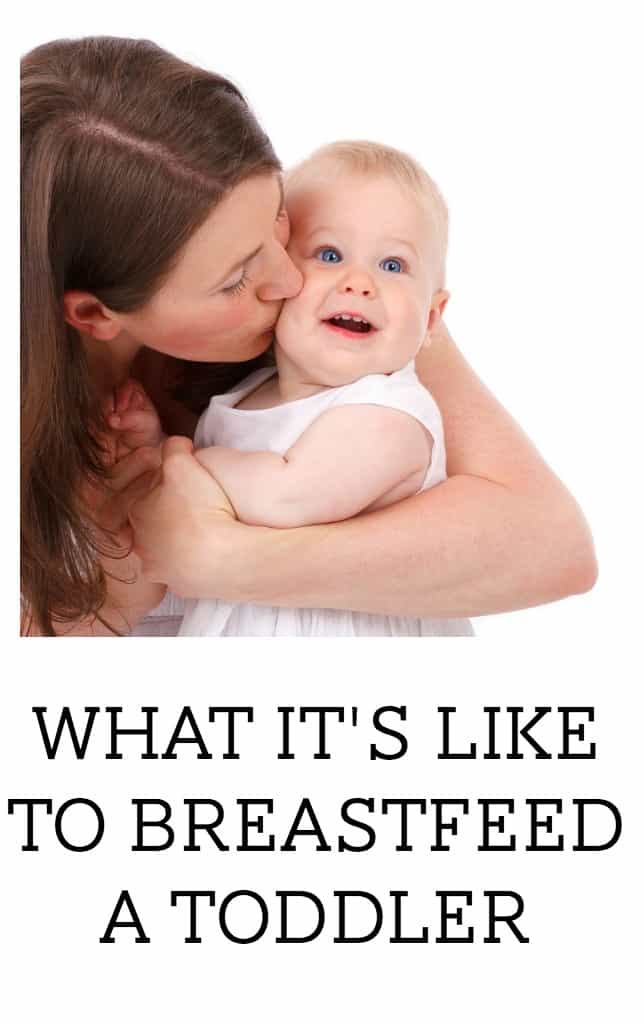 My daughter was in the NICU briefly, and I had to pump immediately, which also made it more challenging. My goal was to make it those first six weeks and take it from there.

After I hit my first six week goal breastfeeding started to get easier. It was still hard and while it did get more enjoyable, I wouldn't say it was super easy for a long time.

Somewhere between six months to a year breastfeeding got a lot easier. So why would I want to quit breastfeeding at a year just when it is becoming much more enjoyable? Breastfeeding a toddler was never really in my plan but once my baby was a year old I realized there was no reason to stop.

I then decided we would just keep going until she was ready to wean. Despite old wive's tales that say otherwise, breastmilk does not lose it's nutrition once your baby is one. It is exactly the same nutritious food that is perfectly made for the age of your child. Why would you give that up if you didn't have to?

I ended up getting pregnant a little bit into my daughter's second year, and and she weaned on her own. While she was over a year she wasn't too far into her toddlerhood when she weaned.

I was actually very sad when my daughter weaned. The knowledge that I got to breastfeed another baby soon helped. People in my life who have never breastfed did not understand. Shouldn't I be happy at the freedom or ready to be done?

I am happy to say now that my son and I have made it farther in our breastfeeding relationship than my daughter and I did. He is still all baby to me, but in reality he is becoming a toddler, and I now know what it's like to breastfeed a toddler. I have no intention of stopping until he is ready or for some reason I feel absolutely ready (I can't see that happening ha).

Well nursing a toddler is very different than an infant. These are just a few of the ways it is different.

It's easy. My experience now doesn't resemble those early days with my first baby at all. Back then breastfeeding was a foreign and exhausting undertaking. This is kind of the payoff for all the hard work early on. It's just easy, it doesn't take much time, it doesn't hurt and he doesn't even nurse that frequently. I have most of the freedom that people probably think weaning entails but I still get the wonderful close bonding of breastfeeding all at once. Most of the time I don't even wear nursing bras anymore.

It's a great excuse for bonding and comfort. It's a wonderful way to just take a break and sit still with my boy. For a few minutes, a couple of times a day. He is an extreme whirlwind of activity these days, always running, climbing and exploring but when he slows down, just for a few minutes to nurse it's a wonderful chance to cuddle.

It gives me the ability to solve all problems easily. Breastfeeding still calms him and is a cure all for comfort. It is the easy way out when my son is upset and we can't figure out why.

It's still nutritious. I can be assured that my toddler is still getting tons of nutrition from breast milk when he is sick or just doesn't want to eat that much. It provides lots of energy to him.

It's funny. Have you heard of nursing gymnastics? Well it is pretty funny when he is contorting his body to try and see what else is going on and climbing all over me, all the while he is nursing. In this way maybe an infant is a little easier since they mostly lay still and fall asleep.

Basically, it's the easiest way to calm my son, bond together, and slow down together. It helps him fall asleep easily and I know I can count on it as a comfort to him when needed.

There are times when I don't feel like breastfeeding anymore but those times are rare. I am lucky that my son is a good sleeper. I know there are many women breastfeeding their toddlers and those toddlers still want to nurse at night and that can be hard and exhausting. This is why I believe all women need to do what is right for themselves and their families. For me personally, the only time I really feel tired is if something is going on with my son, he is sick or teething, and waking more than normal. Of course, we all have those moments with our kids, whether breastfeeding or not.

In a way I do still feel a level of commitment to him with breastfeeding. I want to be there to nurse him to sleep and I don't want to leave him too long. BUT, I know that I would probably feel that way even if I was not breastfeeding. I felt that way with my daughter for a long time even after she weaned. And, I know if I did have to leave my son he would be fine. There is a level of flexibility with breastfeeding a toddler that is not there with a young baby. 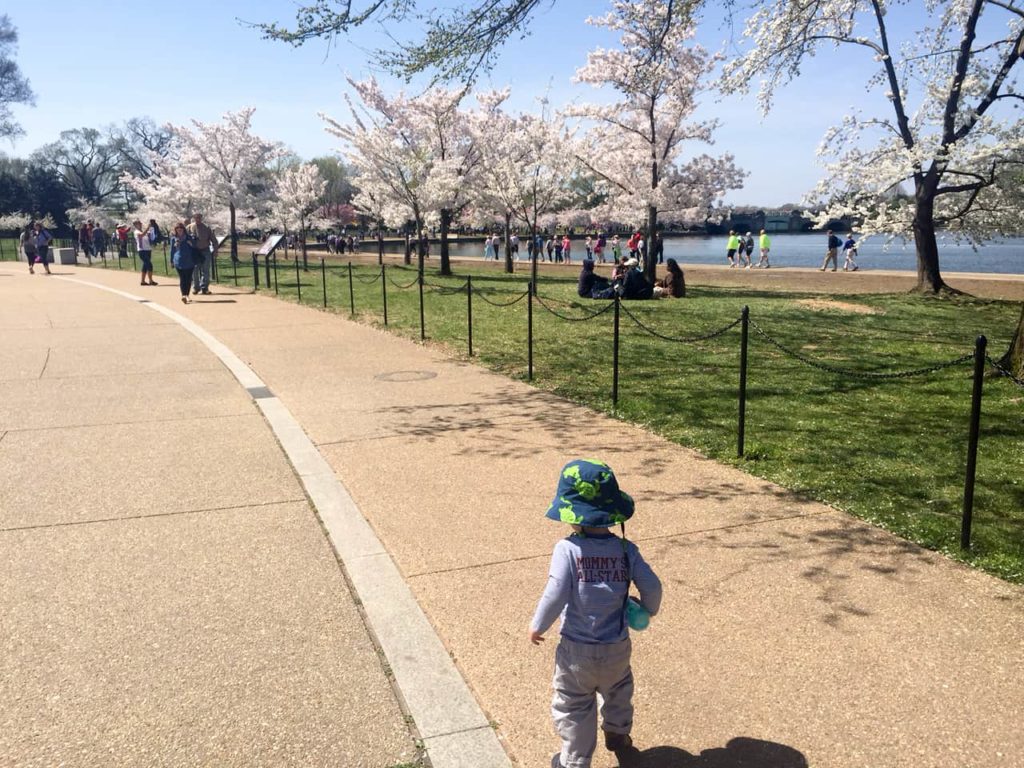 There seems to be a push for parents to always move on to the next stage in our children's lives. To rush it all along and hit the next milestone. Why would I want to rush weaning? Our babies are only so little for such a short period of time. If this is something my toddler and I both enjoy what is the rush?

The WHO recommends breastfeeding until at least age two and the world wide typical age of weaning is between 2-4 and some studies even say 7. Why do so many people think it's strange to breastfeed past one in our country? I'll never know. Before I had kids it's not something I gave any thought to at all. Now that I do have kids I am just doing what feels natural and right to me. It is not selfish and I am not doing it for me. While I will be sad when my son weans I am not pushing him in either direction. It's something we will figure out together and do when the time is right for us.

Interesting read. Before I had kids, I never thought about breastfeeding either. But when I got pregnant with my first child, breast or bottle wasn't even a question. For some reason breastfeeding just felt like the natural thing to do. I guess because it ACTUALLY is the natural thing lol. We stopped at 9 months. I'm not even sure why. With my son, we made it to 18 months. That time I made the decision to keep nursing until it became uncomfortable for the both of us and that's exactly what happened. We both had enough lol. I'm pregnant with my 3rd child now, so I wonder how long this time will last.

Congrats on your pregnancy!! 18 months is great! Thanks for stopping by :)

What a great article! I am still nursing my youngest who just turned 5. With all 3 of my kids I've always believed in child led weaning. My oldest weaned at 2 1/2, my middle 4 1/2, and my youngest still finds comfort in her "milkies." I've read studies that if humans weaned like other mammals, then weaning would happen when their baby teeth start to fall out around 7-8 yrs old.

Hi Stephanie! Thanks for commenting :) Yes I have read those studies too. Congrats on nursing your children so long!

Yay! I was able to breastfeed my firstborn until she was about 18 mos. I wanted to go a full 2 years because she was born 10 wks early and I wanted to give her as strong of a boost to her immune system as possible. But I had to take a prescription for illness and didn't want to give any to her, plus she was already sort of self-weaning. I was distraught. She barely noticed we stopped. With my second, we made it to about 2 years and I was ready to be done. She wasn't, but we managed to wean. Everyone is different, but in my opinion breast milk is best and our pediatrician was really encouraging of a full two years. Great post!

That's awesome Brooke! Way to go nursing both of them for so long. My son is still under two so who knows maybe I will feel ready to be done by then. We'll see :)