Breastfeeding is not always easy, it does not always come naturally and if you are anything like me you may unknowingly make things even harder on yourself. 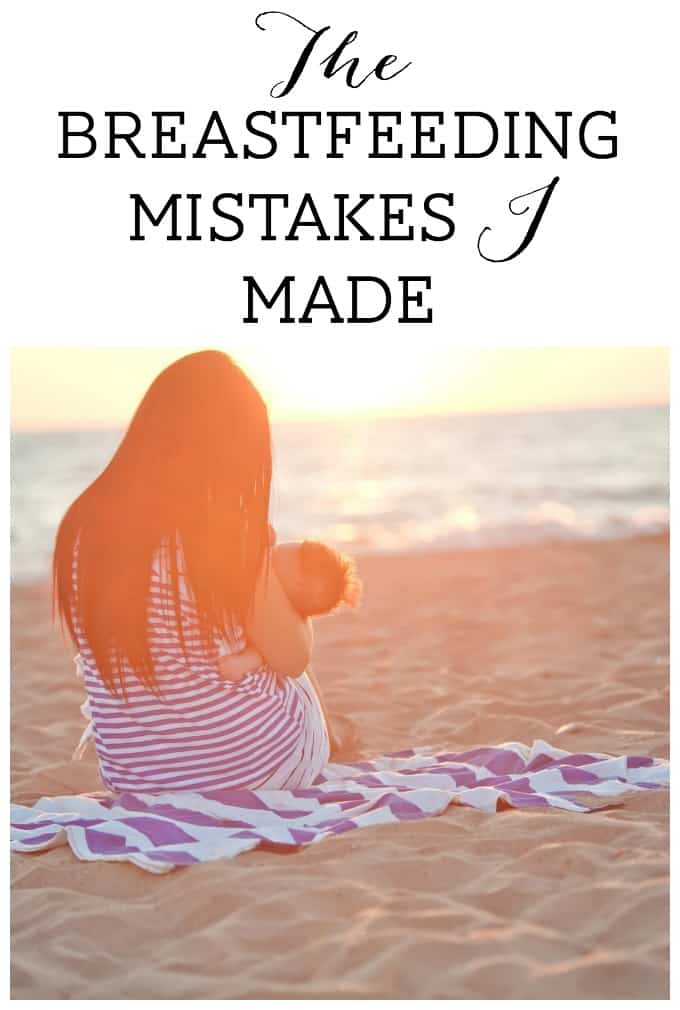 I prepared but I didn't really prepare

While I did take a breastfeeding class at the recommendation of my OB, I did not think much about breastfeeding, I didn't buy many supplies (I did get a few) but the thing I really did not do was think about how breastfeeding was going to fit into my life and what it meant for my baby at all. I wanted to do it because it was recommended and that is as far as my preparation went. Now I was a first time mom so I am sure some of that is normal, but I know there are a lot of women out there who are much more prepared than I was.

Line up a support system. I wish I had known where to turn right away for help. I wish I had read more about breastfeeding, and I wish I knew where I could find a lactation consultant or La Leche League group before I was already crying along with my baby.

My first mistake after birth

I did not put my baby skin to skin right away. Once she was here we were so excited but she was promptly bundled up and passed around.

Skin to skin immediately. There is nothing like it. I know now because I did get to experience it with my second baby.

My second mistake after birth

I did not breastfeed right away. I know it's nuts. Here I write a breastfeeding blog but I did not nurse my new first born baby right away. Since she was swaddled and we did not have skin to skin I thought she was fine. The nurse actually told me she could wait a few hours to eat. My husband recalled from the class we took that she should nurse soon. He said something a few times about it but I put it off. I ate something and went to my recovery room without ever breastfeeding.

Breastfed immediately, along with skin to skin. I ended up attempting to nurse her hours later and it did not go well. I did get help from the hospital lactation consultant, but she was not latching well.

I sent my baby to the nursery

When my daughter was born most hospitals were not breastfeeding and baby friendly. It's getting better, and many hospitals in the U.S. are working to establish baby friendly status. My second birth experience at the same hospital less than two years later was incredibly different.

But... I sent my baby to the nursery so I could sleep. I know... UGH. How could I? Well I really wish I did not, but it was encouraged back then (I sound like I am writing about 50's!) and it was touted during my hospital tour as a nice way for mom to have a break after childbirth.

Yes, childbirth is hard and we are exhausted but I slept much better with my second baby right next to me. So sending my first to the nursery feels wrong in hindsight.

My baby ended up in the NICU

While she was in the nursery she suffered a choking incident that sent her to the NICU. I don't know why she choked. She had swallowed a little amniotic fluid on her way out and that was probably the cause. I don't know because I was not there. I do not know what would have happened if she had been in my room with me. Would she have choked, would I have known what to do? Maybe it's good she was with nurses, so I hesitate to call sending her to the nursery a mistake, but it's not something I would ever do again.

Once she was in the NICU all of my wishes regarding breastfeeding and pacifiers were ignored. When I arrived to see her she had a pacifier and they had been giving her formula. She continued to get formula for her entire NICU stay. I tried to breastfeed but she would not latch. I did get hooked up with a breast pump and started pumping after every feeding attempt, but looking back I think my efforts were half hearted. Especially when it came to nursing. It just wasn't working and it felt like work. I was more concerned with when she could come home and making sure she was eating something.. so formula it was. The best thing I did was continue to pump though. The lactation consultant convinced me to pump to bring in my milk supply, and sent me home with a hospital grade pump.

And then things got better

But not before a few more mistakes along the way. My baby got to come home. I left the hospital feeling a little sad and like I had missed out on some normal bonding. I came home with tons of formula but still determined to breastfeed. The first night home my husband gave her formula so I could try to sleep a little. That was another mistake, I know now that supplementing will only decrease milk supply so it's really not smart unless medically needed (and my milk had not even come in yet, delayed due the NICU stay).

Then one day I was pumping, I did pump after every feeding still, and the milk started flowing.. oh happiness. My baby started latching better (I was using a nipple shield too), she started breastfeeding, we never gave her formula again and I eventually ditched the pump. So I made it! We went on to have a really great breastfeeding relationship well into her second year.

But yes, I made several mistakes along the way. I would do it all differently now, and I did get a chance to the second time around. But that is part of parenting right? We learn as we go, we are not perfect, and once we figure something out it really feels wonderful.

I so wish I had realized how important it was to have good breastfeeding support in place before giving birth. Like many FTMs, I figured if breastfeeding was so natural, how hard could it be? My son is almost 3 months old and all the LC did in the hospital was keep shoving him into my boob, which didn't help. He just kept screaming. Trying to recover from a medically necessary c section, operating on the least amount of sleep I've ever had in my life AND struggling with breastfeeding was extremely stressful. LO wouldn't latch so I tried pumping, but my milk didn't come in until day 5 in the hospital, so I had to supplement. What I'm most aggravated about is that the LC was absolutely no help. I wish that I'd had the presence of mind (freakin pain meds!) to ask for someone else (IBCLC or some other, more qualified health care professional) to actually assess me and assess my son for a tongue tie. And the hospital claimed to be baby friendly... my big toe! Oh well, at least I can say that I tried to breastfeed. If I ever have another child, I will make damn sure that I have an IBCLC lined up ahead of time. I cannot believe the level of ineptitude demonstrated by so many of our healthcare providers and the level of BS I've had to put up with dealing with insurance companies, nevermind Medicaid.

Aww that sounds rough! It's definitely not as easy as we think it will be. Having good support is key!

I made a bunch of these mistakes. I have a 6 week old preemie still in the NICU. I'm pumping for her, and getting around 17 ounces a day - but i have to WORK to get those 17 ounces, and I'm reading that by now I should be making almost double that. Is there any hope that I can still breastfeed my daughter, or am I going to be forced to supplement?

Hi, amazing job pumping all this time for your preemie. Is she coming home soon? I am not sure on what pumping output should be at this stage because this is a unique experience I don't know much about. If you want to up your pumping output maybe try power pumping for a few days? I have an article about it Also, you need local support, do you have a La Leche League near you or a lactation consultant you can talk to? Here is a link for finding an LLL near you http://www.llli.org/webus.html. Keep pumping if you can because even if it's not enough you may still be able to breastfeed once your baby is out of the NICU. If you can pump to keep your supply going then breastfeeding should increase it more later. Good luck!!

I just stumbled across this post and it's just what I needed! I'm in the midst of correcting most of these mistakes and a few others right now and feeling quite alone in making them. Thank you for putting this out there and letting those of us who are on that path know that we're not alone!

Hi Tasha! Thank you! Yes I made plenty of mistakes but went on to love breastfeeding and be successful with it.. .twice! Good luck!

Sorry you got off to such a rocky start, but so happy that you were able to make it work in the end! Hospitals really seem to be catching on to what helps moms and babies get breastfeeding off to a good start.

Forwarding this article to the expectant moms I know!

Thanks Amy! Yes, it did work out. Hospitals are getting much better. There was such a difference at the same hospital even between my two kids.

Hello, your breastfeeding mistakes were just the first of the many mistakes you will make as a mother. We all make mistakes! We do the best we can, but there is always new, uncharted territory and we don't always have the guidance we need at the right time. The good news is, it will all be fine!

Thanks Michele! Oh I know my list of parenting mistakes goes on and on. Learning as we go :)