When I debated whether or not I wanted a third baby, it didn't occur to me that I might end up wrecking my body in the process. I wondered whether I was pushing my luck having another baby at advance maternal age, and I worried about having a healthy baby. I did not think about myself. But, now that she's here and I love her a ton, I am dealing with some after effects of a third pregnancy and pushing my body possibly too far. 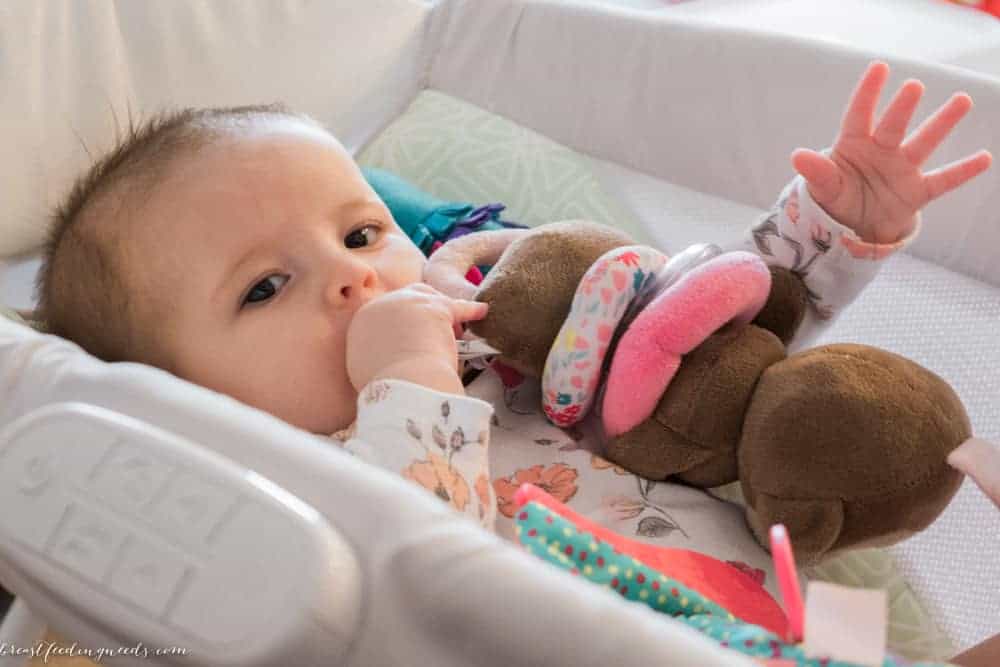 This super cute baby was worth it

During each pregnancy I have dealt with SPD which stands for Symphysis Pubis Dysfunction. It's common during pregnancy and it usually goes away as soon as you give birth. But, this time I still had some pelvic pain after having my baby. I asked my OB about it at the six week mark and she did not seem concerned. I tried to ignore it and went on with life.

Around 8 weeks postpartum I decided to start exercising again. I bought some BeachBody On Demand programs and instead of easing myself into it I pushed and went as hard as I could. Yeah, I wanted to lose the baby weight and I wanted to lose it quickly. This was pretty dumb on my part. I mean you know after three babies back to back it's not going to be quick. And, I am breastfeeding so I know I cannot cut back calories too much or my supply might drop.

I followed the program for about a month and it was great, I lost several pounds, and then one day I decided I didn't need the modified moves anymore. I attempted something called sprawls in P90. Look, if you are recovering from SPD, do not do this! This move involves jumping on the ground while sprawling out your legs and then hopping back up. Sort of like a burpee but different.

The next day I was walking and felt the most excruciating, electrifying pain which felt like it was coming from inside of me. I continued to feel this pain almost daily for two weeks. I could not walk or function when it was occuring and that's pretty hard with three children under my care. I went to the ER twice, my OB, my primary care Dr. and had an MRI.

I ended up with physical therapy and it was discovered that in addition to recovering from SPD I had an upslip, a term to describe when one side of the pelvis is higher than the other, and some asymmetrical tilt to my pelvis. I know that P90 sprawl had something to do with it (sorry BeachBody, I loved it while it lasted). According to my therapist doing that kind of work while not fully healed from child birth was not smart. I know it now, but wow I had no idea how bad it would be. After almost two months of pain I am slowly getting back to normal.

So let this be a warning, take it easy after child birth. Don't push yourself, especially if you are dealing with SPD or other ailments during pregnancy. It can be hard on the psyche to put our bodies through so much and not be able to bounce back quickly. Let me know, did you deal with SPD after pregnancy?

I had SPD pretty bad with my first pregnancy. I had to diagnose myself because my OBs had no idea what I was talking about but I had every symptom. Mine started when I was doing a “pregnancy safe” exercise of side shuffles with a band around my ankles. It just got worse and worse but did improve after giving birth but I had some lingering issues. I was extra careful with my 2nd and didn’t have any issues until now. So my 2nd baby was 10 months and all I was doing were fire hydrants with a band and now 2 months later I still can’t run again or tumble at gymnastics (I literally waited until I was 7 months postpartum to start again). Anyway I’m going to see an orthopedic doctor and maybe I can start PT for it because it’s quite frustrating. One question, could it be breastfeeding that is making me more vulnerable to it?

I'm 38, going on 39 this September. I've had 3 daughters. My last pregnancy was absolutely traumatic!! First off she was an amazing surprise...but from about the time of 4 weeks on it was torture. I was so terribly sick. Only saltines and Sprite for 3 months... then at 12 weeks I got a kidney stone and oh my goodness I'd rather had been in labor!!! Then from at about 16-20 wks on I had the most intense pain I've EVER had in my life! And my first baby was over 10lbs... it was a burning, tearing, hot, like my pelvis was being ripped apart...I delivered her right at 38 wks. She is now 11 and will be 12 in October. I STILL am dealing with this horrible pain daily. The pain is awful. I've been to the chiropractor and the right side of my hips is higher than the left. I've gone to physical therapy and I have prolapse and have SI joint dysfunction also. Have any of you found a solution to end this pain? Or is it a life long condition?

Hi, I did get help from a physical therapist who specialized in women's pelvic conditions and worked with my local not for profit hospital. If you can find someone like this I think it would be your best bet. Start searching online to see if there is anything near you. Good luck!

I had SPD during pregnancy and went to a chiropractor who was trained in the Weston Method. It was SUCH a lifesaver. I’m now experiencing it postpartum as well, which is surprising. This article is helpful in letting me know that it’s possible to get it after pregnancy too.

Hi Jen! I found your blog as I was looking for product reviews of the Peloton. I'm 31 weeks pregnant and due November 6 and my husband suggested maybe we should get a Peloton for my postpartum working out. Then I noticed you had SPD. I also have developed it, I'm 35 and it's my first pregnancy. I was so shocked that I developed an injury because I'm normally so active, so pregnancy has been especially difficult as I cannot work out the way I had hoped. I started feeling the pain around 20-23 weeks. Do you have any other suggestions on workouts while pregnant dealing with SPD or advice to make recovery easier? I was sad to have to stock my long, rigorous walks and joined my local Y so I could swim laps which has been a lifesaver.

Unfortunately I did not find much to help the SPD during pregnancy except wearing a support belt and I have heard working with a physical therapist during pregnancy can help. The Peloton will be an amazing postpartum workout and is 100% worth it. It has changed my life! Good luck.

My youngest just turned 3 and I'm still very disabled. Finally got a physical therapist who realized the importance of focusing on the root cause. She does a maneuver to move the inferior pube up. It makes a huge difference in pain level and what I can do. She can't get the two sides of the pelvis to rotate back into position, but still, I'm finally seeing a glimmer of hope for regaining mobility and the ability to do the things a mom needs to do.

Good luck! I am doing much better after months of pain and physical therapy.