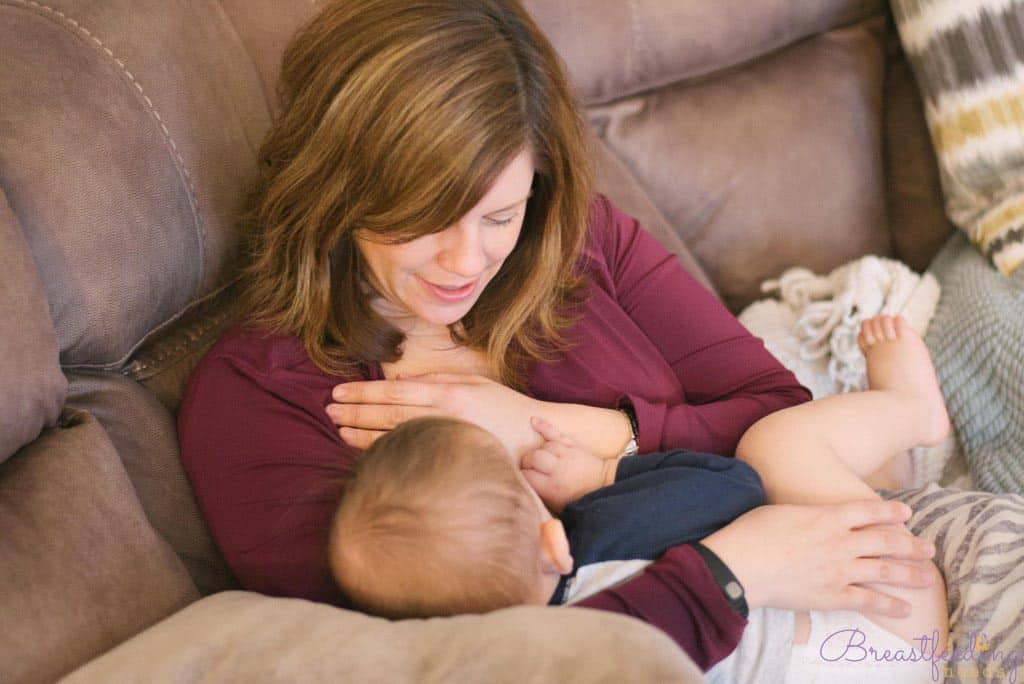 Obviously I am pro breastfeeding since I write a breastfeeding blog. Now, I admit that before I had kids I didn't even think about how women fed their babies, how I would feed my baby, or anything related to babies much at all. I decided to breastfeed because I heard it was recommended as best. Once I became a mother I discovered I loved it and became very passionate about it.

My passion led me to discover something disturbing though. A tendency to shame women for feeding their babies. I mostly noticed it as a breastfeeding mother. While I have not personally been shamed for breastfeeding in public, I have gotten my share of comments speculating about how long I might breastfeed, as well as opinions on breastfeeding a toddler and what is appropriate or inappropriate.

I also noticed this tendency to shame breastfeeding mothers in stories I read online, and stories overheard in some of my mom groups. And then I heard from formula feeding moms, they feel shamed as well. How about we all stop shaming mothers for feeding their babies?

Contents show
1 Shamed for formula feeding
2 Shamed for breastfeeding
3 Shamed for pumping or combination feeding
4 How about we stop shaming all mothers?

I never really thought about the formula feeding mom's perspective until I saw a mother in my new baby group crying about giving up breastfeeding and using formula. She felt like she had failed and she felt like she had to explain herself to all of us.

Or, the mom who admitted to me that she uses a breastfeeding pump brand of bottle for her formula, so that people will assume it is pumped breastmilk.

And then there was the mother who had someone come up to her in the grocery store and ask her if she knew how much money she was wasting on "poison" while buying formula. This is a mom who had a preemie that she pumped breastmilk for tirelessly.

For the breastfeeding moms, know what we hear?  Any time an article is published about breastfeeding, and especially if it mentions breastfeeding in public, you will undoubtedly see these comments:

Women who breastfeed in public do it for attention.

Breastfeeding in public is fine, but only if you use a cover and are discreet.

Breastfeeding is great, but it's an intimate thing between mom and baby and not for others to see. Do it at home before you go out.

That's what breast pumps are for so you can pump a bottle to bring in public.

Urinating or having sex are natural but I don't do those in public.

I don't want my children to see it and have to explain what that is.

I support breastfeeding, I breastfed five children but I was always discreet.

You chose to have children why should I be subjected to seeing it because of your choice?

It's okay to breastfeed an infant but once they are old enough to ask for it, it's not.

How long are you going to breastfeed? It's okay when they are young but I don't want to see a toddler breastfeeding.

I formula fed because I couldn't handle being tied down that way.

And as breastfeeding mothers, sometimes we feel shamed for being proud of our accomplishments and meeting our goals. As if we are mentioning them to make other parents feel badly. This is rarely the case.

Shamed for pumping or combination feeding

Guess what? The shaming doesn't stop if you do bottle feed your pumped milk in public. Or if you combination feed formula and breastmilk.

Overheard by a friend in my mom group, at a restaurant, as she fed her baby pumped milk, "Isn't it sad that so many moms don't breastfeed anymore."

Another friend combination fed formula and pumped breastmilk. She was at an exercise class with a bottle, she doesn't remember what was in the bottle, but she does remember another mom staring at the bottle and mentioning that she never used a bottle.

How about we stop shaming all mothers?

How about if you see a mother feeding a bottle you don't give her a second look? How about not asking her why she is using a bottle or what is in the bottle?

It's extremely hard and discouraging to a new mother when she hears or reads any of the sentiments above. I am a huge breastfeeding advocate and believe we should educate ourselves while pregnant and be encouraged to breastfeed when our babies are born. But I feel no need to judge, shame or question another parent. She is the parent and she will do what she needs to for her family and herself. How about we just stop shaming mothers for feeding their babies?

I love this, we need to let everyone do what is best for them! Thank you for sharing your experience. Thanks for letting me post your link to my site to share your experience with others!

Hi Jenna! Thanks so much for sharing!! I will go find your post to share as well :)

I love this article and applaud your viewpoint.. it's been a long time for me as well - my oldest are 23 and 21, and my youngest is 7 - but I really think it's about not making assumptions about one another. You know the saying.. Everyone is fighting a battle you don't know anything about.

Thanks Kim! So true! Thanks for stopping by.

Well said. I am pro-breastfeeding as well, but I simply ran out of milk with 3 of my babies. I tried everything, but it just didn't work. It was hard to feel judged for giving my baby formula when I wished I could do something else. We're all just trying to do the best we can.

Thanks Amy!! Yep, we are all doing the best we can and the comments can hurt.

It's a long time ago for me now -- my kids are 22 and 16, but I breastfed both of them until they were past 2 years old. I remember how often people asked me things like "Don't you think it's time to wean her?" My response was to quote statistics at them, which usually shut them up: "The average age for weaning worldwide is 4 years old." Although I tried to keep it discrete in public places (I refused to feed my kids in bathrooms), I did see it as a political act as well. The more women just go ahead and breastfeed in public, the less people will think there's something wrong with it. And the same goes for bottle-feeding, for that matter.

Thanks Rachel! I am not sure when breastfeeding in public became this controversial thing or if it always was. Definitely need to normalize it and stop worrying about what other mothers are doing.

I totally agree with every point you make here, and am so glad to hear someone making them. As a mum of four (breast fed all of them) I think I've heard it all, down to being asked to go to the bathroom to feed my baby by a thirteen year old in front of her parents as she didn't want to have to look. I do think though that this might go further than feeding. Perhaps we need to learn to stop judging others' parenting skills, whether it be how they feed their babies, play with them or discipline them. It doesn't show anyone up in a good light. We are all just trying to do our best.

Thanks Kathy! I have heard plenty of things too and you are right it goes beyond feeding! It starts when we are pregnant and the advice and open commentary begins!