Okay, I recently wrote a post about still breastfeeding my two year old. And.. the fact that I am still nursing him despite being deep into my second trimester of pregnancy. I'm coming up on 24 weeks right now. Breastfeeding during pregnancy has been hard and not always what I expected. 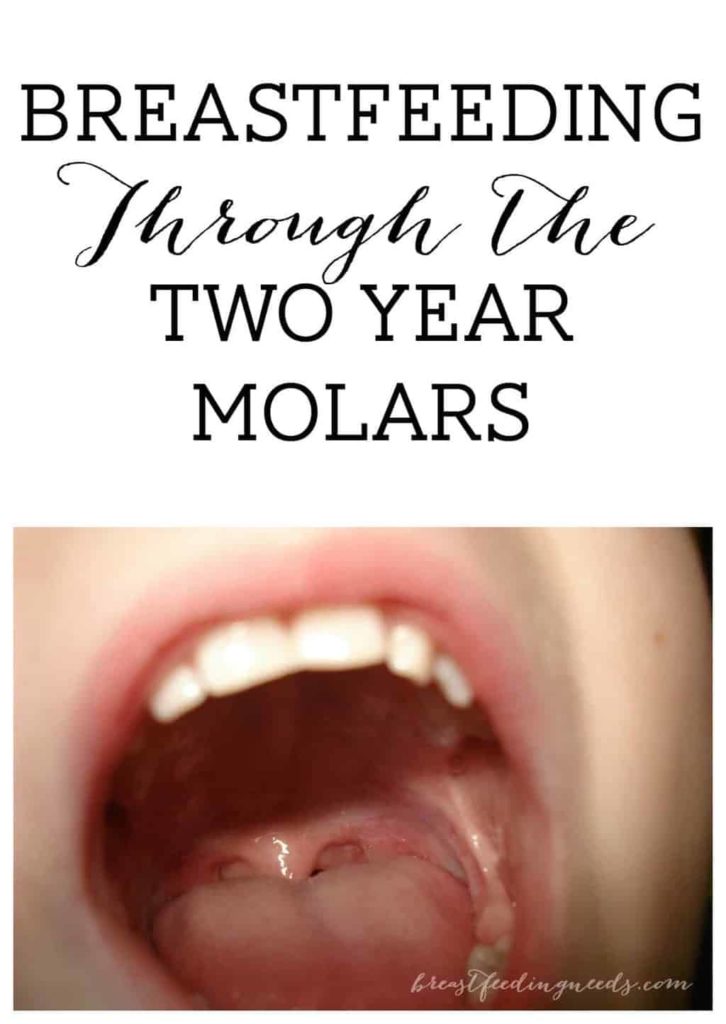 The most difficult time for me was about a month ago when my son's two year molars were coming in. Wow! These molars were a beast. I am sure every child is different because I don't even recall when my daughters came in. It was pretty much a non issue so I suppose she handled it well. My son on the other hand started waking up every single night, multiple times a night, screaming and crying and refusing to settle down. During the day he was miserable and tired and generally not himself at all. This started at the end of November and lasted a month! Yes a month.

My son has been sleeping through the night in his own bed for over a year so imagine my dismay when nightly wakeups started occurring. And all he wanted to do was nurse. For hours. This also coincided with my most painful point breastfeeding during my pregnancy. So on top of being exhausted from being up half the night, breastfeeding was painful and the whole experience was a bit torturous.

I tried nursing him back to sleep in his room, I tried cosleeping, I did a combination of both. I was not sure if this was a sleep regression or something else. Despite always trusting my instincts and not believing in sleep training at all, I tried letting him cry some. I second guessed myself and wondered if I somehow screwed up his sleep (even though I advise women all the time that this is not possible and that babies outgrow the need to nurse to sleep).

In addition to the wakeups, he suddenly wanted to nurse to sleep every night and freaked out if I left while he was still awake. Before this I had been nursing him a few minutes and leaving him awake to fall asleep on his own for about a year. So what gives?

I wasn't sure what the issue could be until it occurred to me to look for molars. He had all of of his teeth except for that last set of molars. Two on top and two on the bottom. And sure enough when I checked I could see his bottom molars coming in. It's hard to get a good view but I found a way to pry his mouth open. By the time I checked we had been dealing with disrupted sleep for two weeks or so. I could see one molar completely out and another one poking through. Woohoo, I had an answer to my disrupted sleep. Even if it's torturous getting up all night, knowing the reason why is kind of a relief right? But then I wondered how long is this going to last?

It ended up being a full month. Yep, a whole month of two year molar torture. As I said above, my daughter did not have this experience, and according to my pediatrician and random articles on the internet the pain should only last a few days. Ha. Well I know better now. I checked that second molar every day and I could see it making it's way slowly through the gum. It was slow and for my son it was painful.

So I did what I needed to do to get through it. I put my son to bed in his room and I let him sleep with me when he woke. It was the best way to get the most sleep. I nursed him as much as I could stand it. It seemed comforting to him during teething. He was barely nursing anymore before this incident and it seemed almost like cluster feeding again. Nursing was painful for me while pregnant, so I had to limit it when it became too much. It was a phase and we moved on through it. The tooth finally emerged. He went back to sleeping through the night in his room. He still wakes occasionally, he has been sick a couple of times since then and I am sure that is why, but for the most part he is back to normal.

He has not gotten his top molars yet though. I wonder when they will come and figure it's right around the corner. I admit, I am scared. Super scared. At least these are the last ones right?

I'm is glad I found this postwhile searching for reasons why my 2 year old is out of control at night. She's like a newborn all over again. My son is 7 and never had any issues like this. She's cluster feeding at night like a newborn. She won't let anyone but me near her during the day, I literally can't go pee myself, or she's frantic. It's been happening for several days now and I'm just exhausted. Finally I thought about her second molars and decided to do some googling. Glad it led me here. Thank you for your story!

Hi, glad my story helped! It does sound like that could be it. My last baby is now two also and recently went through this too. I am happy to say at 2 and a half it has calmed down some and she is sleeping pretty well again! Good luck.

Hello Jen, I suspect my 21 month old to be getting his second molars as he is doing exactly what you describe in this post. He suddenly doesn’t want to sleep in his cot (protests by screaming until I come get him), wants to nurse all night all (4-6 wakeups) and is generally upset and cranky. It is also hard to get him down for his day nap. I am not pregnant but my nipples are very sore from the constant feeding. He just got his canines a month or so ago and he was also like this but not as bad. I’m just wondering did things go back to normal with your toddler once the teeth cut? I’ve been co sleeping as it’s the only way I can get some sleep. I am worried I am making bad habits... any advice would be appreciated. Thank you :)

So that was almost two years ago that I went through this and the truth is I don't really remember how soon things went back to normal but we did cosleep a bit and then he did go back to his own room! I was pregnant at the time with my third baby who just turned two and now she is doing the same thing. I would say hang in there and it will improve at some point. As far as bad habits, I tried to be consistent with putting my kids to bed in their rooms and then adjust as needed. Just stick to the routine but cosleep if needed for your sanity. I don't think there will be any longterm damage. Good luck!

I'm very confused as to why people are so eager to wean children. If you research, children anthropologically and historically nursed for a few years throughout the history of mankind. They are little for such a short time. And it comforts them, and nourishes them and protects them. I have a 24 month old who loves nursing several times a day (and night due to final molars coming in, otherwise it's a couple times a night). She never really slowed down her nursing. And you know what? She's NEVER SICK. She's been exposed to flu (twice) that laid my husband out for a week both times, She's been exposed to colds, etc. She's never vomited, never had diarrhea, never an ear infection, never really been sick. She's only caught trifling sniffles for a couple days on 3 occasions, when the whole family was ass-out sick. She was still playing, eating, and everything, just a minor runny nose that wasn't bad. So, is she Super Girl? No. Breast milk is full of antibodies, stem cells, etc that protect them, as nature intended. Everyone is free to do what they please but... I wonder... Why throw out such a priceless tool? I see all the kids we know from our play groups etc sick. To me, it just seems like shooting yourself in the foot to wean them. Then you get to deal with all the problems with no cure. Would you believe she got a bee sting on her finger tip (I saw it happen), Her finger swelled to nearly double, and got red. I put breast milk on it, immediately, (in a moment of worry as my uncle was deathly allergic to bees) and again applied milk a few minutes later. The sting swelling subsided and she was back to playing in a few minutes. Yes. it's true.

I totally agree with you! Breastfeeding is a great tool in caring for our children in so many ways.

Hi Jen, now that you are on your 3rd trimester, are you still breastfeeding you second child? Kudos to you. I am so amazed that you still continue nursing despite all the discomfort. Btw, I just found out that I'm expecting my #3, and I haven't weaned my second yet. She's such a strong-willed little girl, who loves to nurse. I am contemplating on weaning soon, but we will see how it goes...

Congrats on expecting #3 exciting! I am still nursing! I was kinda hoping he would wean but he is super attached so I don't know what's going to happen. I have definitely cut back and we are nursing now just before bed for a couple of minutes only. It's pretty uncomfortable. At this point I am guessing he is not going to wean before the baby is here but who knows.. I have a feeling the day will come at some point when he is done. Maybe haha..Good luck and let me know if you have any questions along the way.