My son recently turned one and he is teething like crazy. He got his first eight teeth back to back around the six month mark. Then we kind of had a quiet period. Now at age one his first set of molars have been just under his gum line for weeks. He has been acting pretty fussy and I could see those little white lumps just under there. Well, I took a look the other day and he has had two top molars, a bottom molar and two canines pop through all within the week! And, I see the other molar and canine right under the surface. Can you say holy moly teething? And, teething pain! So that explains the fussiness and night wake ups ha. So it got me thinking about breastfeeding a teething baby and how teething might affect breastfeeding. 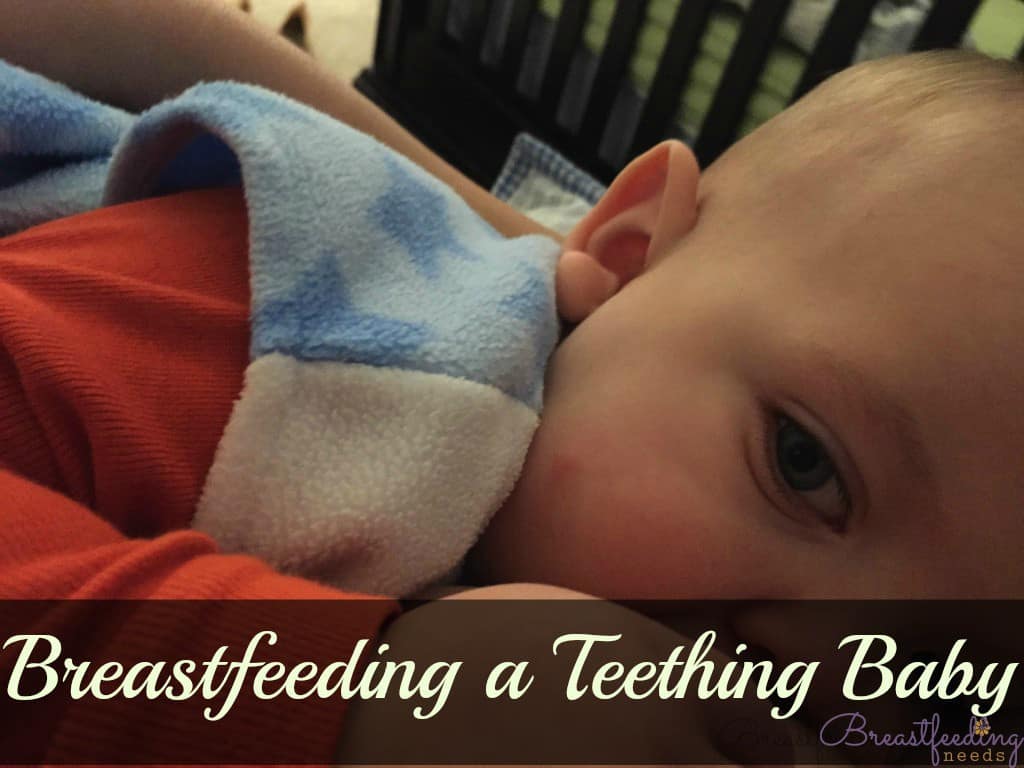 Contents show
1 Teething and breastfeeding
2 Nursing as a teething tool
3 Does teething cause biting?
4 Some tips I have heard to help prevent or stop biting:
5 Conclusion

I noticed while he was teething that it was painful for him to eat food and he wasn't eating much at all. He did want to nurse though, a ton actually. On one of the days during this week of teething; he was unbelievably miserable. He was crying, fussing and very lethargic. I nursed him a lot and it was kind of like having a young baby again because he just wanted to cuddle and nurse. It was pretty much the only thing that seemed to console him. So, I have to say that to my surprise breastfeeding a teething baby was a great tool to get through it.

Nursing as a teething tool

All babies are different and some may want to nurse less while teething due to the pain. Many breastfed babies will want to nurse more though. For my son it seemed very soothing and, as I said above, it was the only thing that would comfort him when he was going through a lot of pain. It made me happy to know that he was still getting plenty of nutrition and plenty to eat even though he did not want any solid food during this time. He nursed so much during the week his canine and molars were coming in that my supply went way up! Crazy.

Does teething cause biting?

I can't even tell you how many times I have heard concern about a baby biting once he is teething or has teeth come in. I have heard this from mothers who are worried about it, and from people who are just curious about how a breastfeeding baby with teeth feels . I have even heard moms say that once their baby has teeth they are going to have to wean. This is so untrue and would mean weaning very early in some cases. It really bothers me when I hear this because it's absolutely not necessary!

Some babies will attempt to bite whether they have teeth or not. If your baby does bite you in most cases a surprised reaction will be enough to stop it. My son has bitten a few times and I just pop him off the breast and stop nursing. This seemed to be enough to deter it. In fact he was most into biting around six months and it seemed to be for attention more than anything to do with teeth. He would attempt to bite, I would gently pop him off and then he would laugh hysterically.

If a baby is properly latched on the breast and actively nursing then he will not be able to bite you. So, most biting occurs while latching on or while finishing up a nursing session.

Some tips I have heard to help prevent or stop biting:

Remove your baby gently by stopping the breastfeeding session as soon as they attempt to bite. If your baby is trying to bite then he is probably done nursing.

Try nursing when your baby is tired and make sure he is not excited or distracted. Don't try to force a baby to nurse if they are not ready.

Watch to be ready to recognize the end of the nursing session. When my son was going through his little biting phase it was usually at the end once he was done nursing. I started to recognize when he was finishing up and would just remove him before he got feisty and bit me!

Teething is not a reason to wean and neither are new teeth! Most babies will happily breastfeed through teething and better yet it may be very comforting and help them through it. Most cases of biting are not related to teething and if a baby does bite you can usually nip it in the bud with gentle techniques.

Please leave me a comment and let me know your thoughts and techniques for dealing with a teething baby while breastfeeding!

thanks for this article i have question can i use teething rings for my baby ?

Hi, yes you can use teething rings!

Just stoping by to say I nominated you for the Sisterhood of the world bloggers award! http://www.myreallifemoments.com/sisterhood-world-bloggers-award/