In my case, I had my first baby in 2012 while employed at a small company with less than 50 employees. I was provided with six weeks of paid maternity leave. 6 weeks paid is considered generous for any company in the United States, and especially for a small company. Despite the generosity, six weeks is not enough time with a new baby to establish breastfeeding, bonding and adjusting to the the massive life change having a baby brings. I used two weeks of vacation to bring my time off to 8 weeks and it still was not enough. I was not ready to be back at work full time and switched to a part time schedule. Many women are forced to make tough choices when it comes to maternity leave and time off. Some end up quitting their jobs, some go part time, some sacrifice financially and go without pay for awhile, others quit breastfeeding. It's hard to make it all work.

The United States lags behind the rest of the world when it comes to maternity leave. We are the only industrialized country not offering any paid maternity leave. While the Family and Medical Leave Act of 1993 does provide up to 12 weeks of unpaid leave, there are exceptions to the benefit depending on how long an employee has been with the company and based on the size of the company. Many women cannot afford 12 weeks unpaid. My company was exempt from this law since it had less than 50 employees, so it was not an option for me when I took either of my maternity leaves.

Mothers must be supported to reach their breastfeeding goals. Paid maternity leave is one critical factor to reaching these goals: 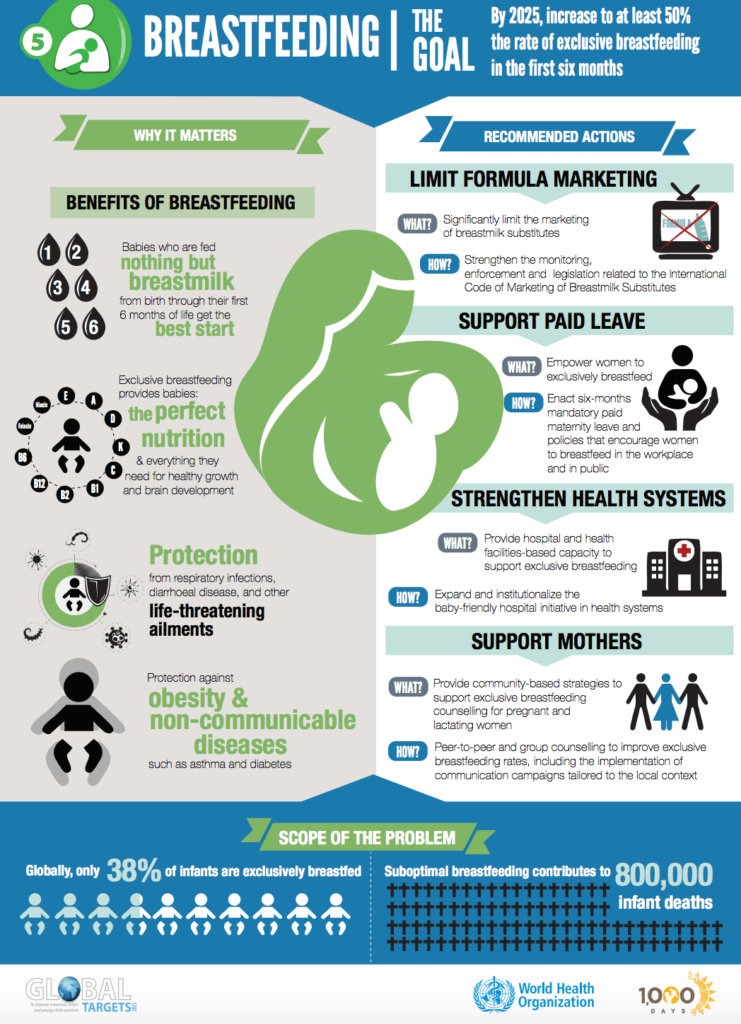 Despite the lack of paid maternity leave a federal law to protect nursing mothers and provide break time to pump is established in the "Affordable Care Act" as follows:

The Patient Protection and Affordable Care Act (P.L. 111-148, known as the “Affordable Care Act”) amended section 7 of the Fair Labor Standards Act (“FLSA”) to require employers to provide “reasonable break time for an employee to express breast milk for her nursing child for 1 year after the child’s birth each time such employee has need to express the milk.” Employers are also required to provide “a place, other than a bathroom, that is shielded from view and free from intrusion from coworkers and the public, which may be used by an employee to express breast milk.” See 29 U.S.C. 207(r). The break time requirement became effective when the Affordable Care Act was signed into law on March 23, 2010.

Unfortunately, loopholes exist in this law leaving many women unprotected. As this story in the Washington Post about salaried teachers shows, not all employees are protected by the law. Salaried employees may be exempt, and companies with less than 50 employees are exempt from the law if they feel it would cause a hardship.

A few states have created their own laws to help cover the loopholes left by the federal law.

49 states and the District of Columbia now have laws protecting breastfeeding mothers by stating they are entitled to breastfeed anywhere in public or private. Many states have additional laws to protect nursing mothers in various ways. You can see all of the related state laws here. Having laws in place to protect mothers and children is another critical factor in making sure breastfeeding works.

I have heard debate and comments from people wondering why they should care about breastfeeding or why women should get paid maternity leave. The arguments range from it not being fair to non parents, or to it being a women's' issue that does not affect men.

We know breastfeeding benefits both mothers and babies and it should be a public health concern for everyone. Breastfed babies have less medical infections and lower health care costs. Women who breastfeed also benefit with long term preventative health care. If all babies were breastfed it would result in fewer infant deaths as well.

When it comes to paid maternity leave it actually benefits the company and employees when it is provided.

When a mother is granted enough time to be ready to come back to work, it improves employees productivity and reduces turnover. Being forced to choose between unpaid leave or leaving your baby at an extremely young age does not benefit anyone.

When we increased paid maternity leave to 18 from 12 weeks in 2007, the rate at which new moms left Google fell by 50%. (We also increased paternity leave to 12 weeks from seven, as we know that also has a positive effect on families and our business.) Mothers were able to take the time they needed to bond with their babies and return to their jobs feeling confident and ready. And it’s much better for Google’s bottom line—to avoid costly turnover, and to retain the valued expertise, skills and perspective of our employees who are mothers.

In case you are wondering what we can do to make breastfeeding and work, work.. here are some guidelines provided by the  World Health Organization: 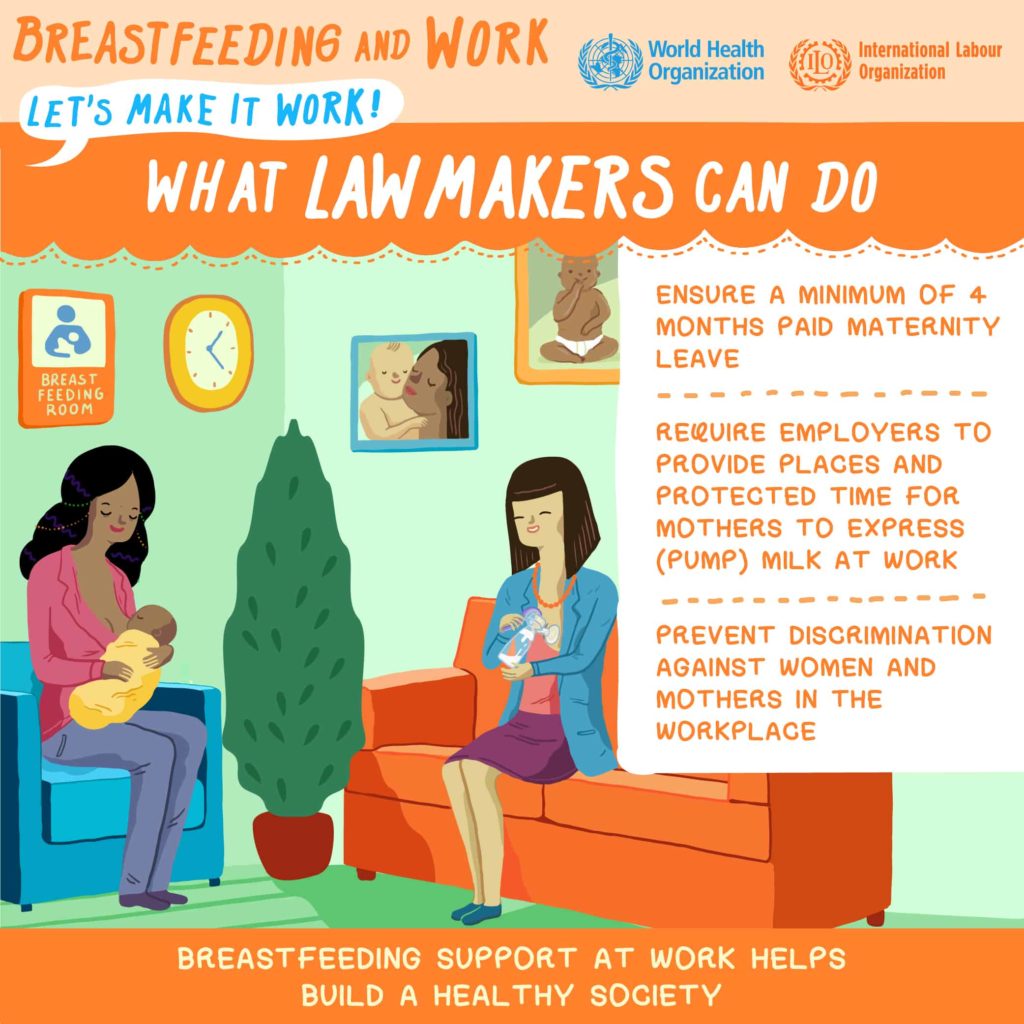 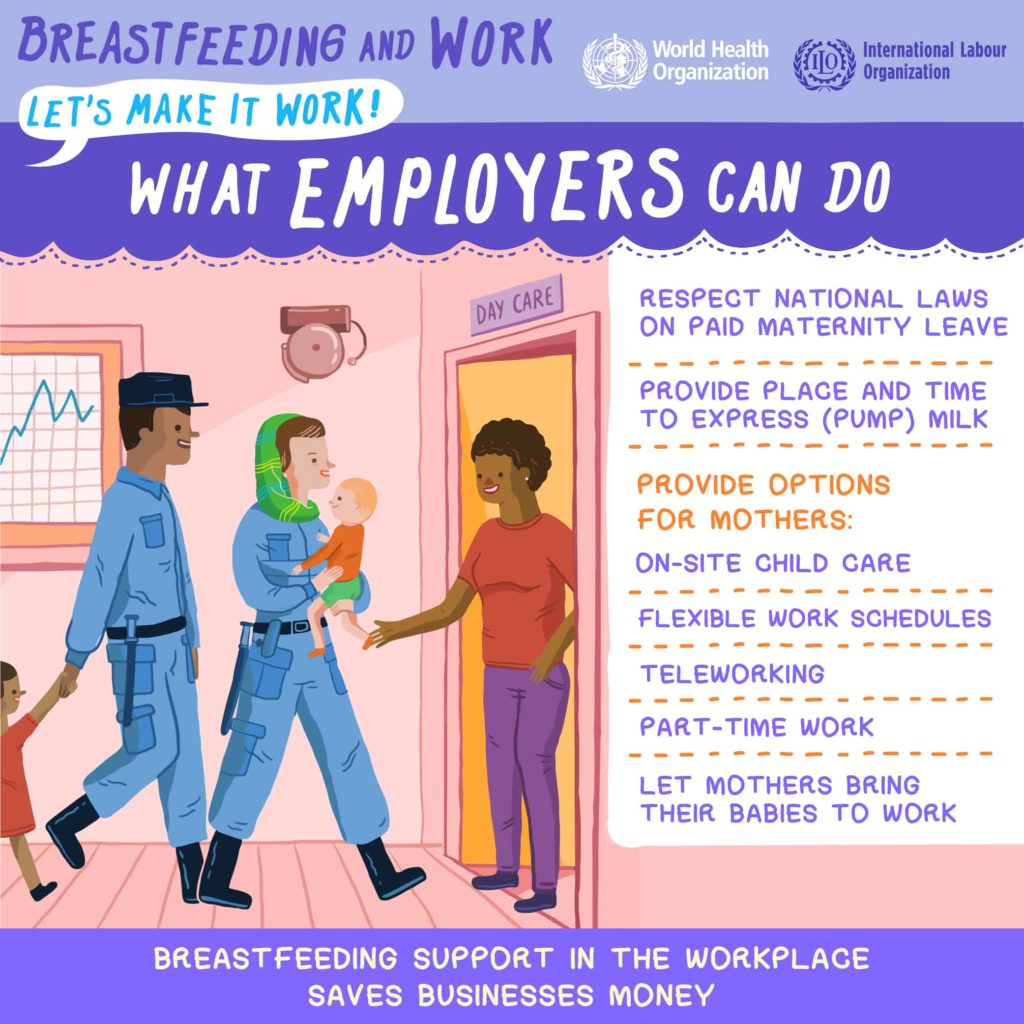 It's my hope for the future to have laws in place to protect breastfeeding mothers at work and a federally mandated paid maternity leave. All of society benefits when we support mothers and babies.