I wrote a post awhile ago called the The Best Things About Being Pregnant. It was full of the typical, obvious reasons pregnancy is pretty great despite all the aches and pains along the way. 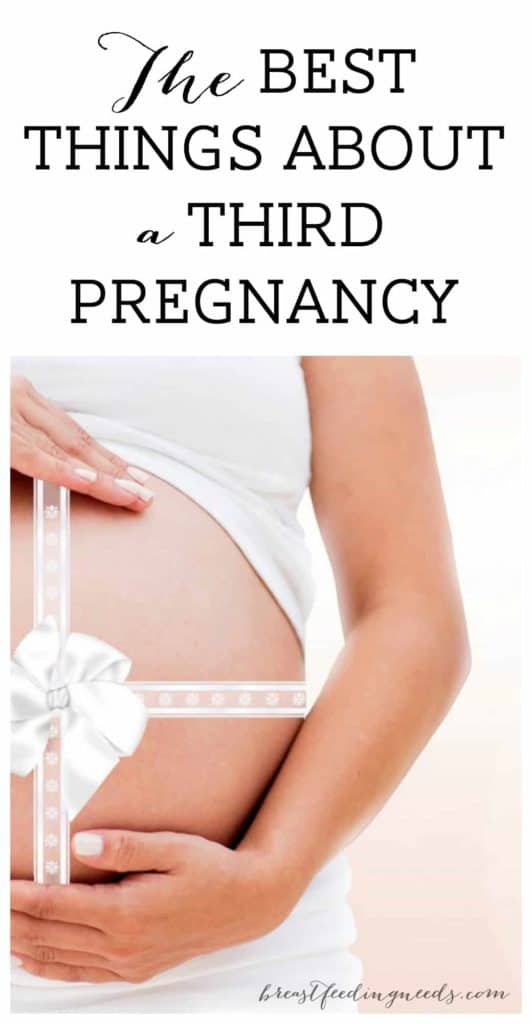 Not caring who finds out or when

While it may be nice to have a surprise, or make a fun announcement, I let people find out organically the third time. I did not try to hide it, but I did not shout it from the rooftops either. I didn't love the idea of anyone finding out too early but if they did oh well...been there, done that..

It goes by much quicker

I am way too busy taking care of my two toddlers to track my pregnancy much and pay attention to dates. I find myself checking sometimes, but I have also forgotten which week I am occasionally. This was unheard of in my first and second pregnancy! As a result time is flying and I feel like this baby will be here before I know it.

Okay, I still have to plan a little but it is DIFFERENT. For one, I have run out of bedrooms for a nursery so I am not creating one. I have done almost nothing to get ready for this baby since I already have almost everything I need already. I have a boy and a girl so clothing is covered and gear is mostly covered (I do need a few items I sold off).

I am setting up a sleep space and items in my bedroom, and that's pretty much it. While planning for a baby is absolutely fun and exciting, especially during the first pregnancy, there is also a freedom to not having that stress hanging over me. During my first pregnancy and my second, my to do list was insane. I probably planned and did much more than was even needed.

This leads to my next point..

I feel much more carefree and at peace

The lack of planning stress is a huge weight lifted when caring for two children already. As I said planning is fun and exciting, but I also remember having meltdowns in previous pregnancies over how on earth was I going to get everything done before the baby arrived. Ha...

I feel a peace from not worrying about items such as:

Yep, I am not worrying about any of this at all. I am sure a third will add to the chaos, and it is a little overwhelming if I think about it too much, but at the same time I know I've got this. I can wrangle multiple kids and I know everything will work out. It's cliche but I know everything with babies and kids is a phase, and whatever challenges I encounter will be temporary until the next one comes along. Therefore it's pointless to worry about it ahead of time.

During my first pregnancy I had no idea what I was in for. Sure I wanted a baby, but would I like having a baby or know how to take care of a baby? It was all so foreign to me and while I took a leap of faith it was not something I had experienced. Second time around I wondered how I could love anyone like my first baby. But of course I do. Third time around it's not even a question. My only question is who will this person be, and how will she fit in with my current children. But I know she will.

Nobody is giving me advice or asking me questions

When you are on the third pregnancy even your Doctors leave you pretty much alone. Nobody is giving me advice, nobody is asking me any questions and it's relaxing! I sort of know what I am doing and what to expect.

Shopping is still fun but different

I mentioned that shopping was fun in my first post about the best things about being pregnant. I don't have much to buy for this pregnancy at all. But that means I can focus on what I want without questioning whether I need it. My first pregnancy I bought a huge bottle set and then barely bottle fed, I was overwhelmed creating a registry and checking off lists of must haves when I had no idea what many of the items were.

This time.. I have almost everything I need and the few purchases I am making are the ones I KNOW I need and know I will love and use, including a new ring sling, a new warm weather soft structure carrier, and a new upscale stroller.. yes I am enjoying those purchases a little too much. While they are few, that makes them less stressful and the research fun and enjoyable.

The anticipation is still wonderful

I mentioned in my previous post that the anticipation was exciting. Even while knowing what to expect and the lack of stress during my third pregnancy, the anticipation is still wonderful! We are still excited and still having tons of fun picking out a name, looking forward to ultrasounds, and all the excitement that having a baby brings.

Another bonus is how excited my children are this time. My daughter was still a baby when I got pregnant with my son. She didn't know what was coming or what hit her once he arrived. They are best friends now but it was hard at times in the beginning. This time she will be four when the baby arrives and she is excited about it. Watching her excitement is so fun. My son will 2.5 so he gets it somewhat too and also talks about the baby. He is also used to having a sibling so no worries about taking away from him that I experienced during my second pregnancy.

Those are just a few of the perks of the third pregnancy. Tell me experienced moms.. what has been the best part for you?

This is exactly true. I am 12 weeks pregnant with my third. I have 2 boys 6.5 and 3.5 my favorite part about this pregnancy is they get to share this experience with me and they will remember their sibling entering the family. That's something the other 2 didn't get or didn't remember. I love how much they want to help take care of me. It makes me feel so stress free. I also love love the stress-free planning and making sure I meet everyone's expectations and advise. I can tell you how much I just don't care like I did the first 2 times. It's all me and no one bothers me this time not even my doctors their not shoving advise or information at me. ??

I loved the post. Yes I feel unprepared this 3rd time around but not worried, not stressed...life is busy and you just kinda go with it- organized um chaos? Lol I’m so blessed with little ones to love and they love me back. It’s strange to think you can keep loving another little one...but somehow are hearts expand with more room;) enjoy being a mom, it’s one of the hardest but best jobs ever! Just remember to somehow fit some you time in, you are still you!

Thank yuh for this i have a 10 month old, 3 year old and now pregnant! I have been having the worst time accepting this but you make it seem like it will be alright!

I can't believe I stumbled upon this! I literally just found out I'm pregnant with my 3rd and my daughter is almost 3 and son almost 2 (Irish twins-11 months apart)! This is exactly what's been flooding my mind all day!

This was lovely to read. I have a 13 month gap between my girls and am planning number 3. Xx

This is exactly what I'm going through! I just found out I'm pregnant with my 3rd! My first two were 13 months apart, so it was stressfull, but now they will be 4 and almost 3 when this one comes around ? I'm excited and not worrried at all like the first 2!